Another day in paradise

Elle: Since I moved to the lovely isle of Puerto Rico on December 1st, 2018, I've been sin carro, getting around via my bike, and asking my co-worker Bridget to haul my butt to and from work every day (muchos, muchos gracias Bridget!). But finally, with much in the way of trials and tribulations, I nabbed a sporty little car - the Mitzubishi Outlander Sport (ooooohhhh)! It may seem like a small feat to many, but for me it was a huge milestone. I've never had go on my own to get a car loan and buy a car. I know there are a ton of questions I should have asked before layin' down the cash for New White (yes, there was an Old White, a trusty, white Honda Civic Hatchback, may ye rest in peace) but daaaaaamn, I own it now, and I'm free! Free to explore the places my bike can't take me.
So that was kind of a big deal.

Elle: In bike news:
- I was so excited to finally test out my new-to-me Argon 18 TT bike (sexy-ass bike, yo)
- I was on my short test drive and just returning to my apartment when, what?!? The left aerobar fell full out! Oy!
- To remedy the unfortunate situation, I msg'd Iron Danny (the seller of this magnificent beast of a bike) and told him about the snafu. He felt bad and came to pick up the bike and bring it to the shop. Ok, I can wait for the bike to be fixed...
-  Ironman Danny brings back the happy, healthy Argon in time for me to take it out for the Sunday ride- YAZZZ!
- Sunday morning I leap out of bed at 6am, giddy to finally ride the majestic Argon. I gear up, put my cycling shoes on, and take it just outside my front door for a little test drive. I stood over the bike, and tried clip into the pedals.
- And tried.
- And tried.
- And tried.
- Arrrrggghhh! Are you kidding me? Really?
- Sooooo... Webb had shipped my cycling shoes to me, plus clips and pedals. BUT guess which clips and pedals are NOT compatible with my Sidi cycling shoes...go ahead, guess....oh yeah, THE ONES THAT WEBB SENT. So another weekend was to go by without riding the Argon. Frack!


Webb: Ugh. That was totally foreseeable on my part.

Elle: Looks like I'm ridin' Big Bertha again! Oh well, it's still a good workout. And I wasn't going to waste a good workout, so I headed out on the big gal and made sure to stop along the route to take photos for all the folks back home... 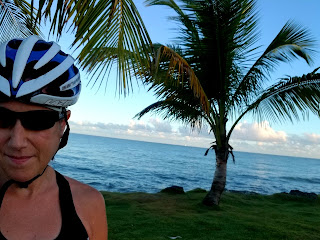 Addendum 1: You may have noticed that Webb did not contribute much this week. But don't worry, I'll make sure he doesn't shirk his blog duties in the future. Hear that Webb? I'm comin' for ya...

Addendum 2: For anyone who was wondering about the fate of Robbie, the ambiguous amphibian who was playing tag with me in the shower, here's what happened: He was still in the shower the next day. I was sad because I thought he was dead. But lo and behold, he still had some life left in him! Once I realized there was still hope, I use the tried and true method of paper and glass (which I once used to save a bat who flew into our apartment in Brookline, MA), and was able to capture and release Robbie back into nature where he belongs. Hooray for happy endings...

Elle: Yes, after a HUGE break, we're getting the band back together - the Blog is back!

So there have been some changes lately. Mostly that I moved to the island of Puerto Rico! Webb is still holding down the fort in Boston with the cats, but for the next year, I'll be soaking in the sun and palm trees.

Webb: Holding down the fort means, I'm staring at the bike trainer afraid of the outside, dreading cold walks to the pool and telling myself, "...this time, I'm definitely going to do that run workout," all while Elle works on her selfie-at-the-beach game.

Elle: I have to admit, I have upped my selfie-at-the-beach game...
I haven't been training all the much lately, and I had knee surgery this past fall, but I'm ready to get back into it for 2019. I've signed up for my first race, the Run Like A Diva 5K in San Juan. I'm on a big team of women, of whom I know only one person,a co-worker who got me connected to the team. Apparently I won't meet any of them until race day. And I think the plan is for us all to be wearing the matching tutu thing. Oh well, it'll be nice to be with a group of runners anyway...

But today I want to talk about bike rides.
In the suburb-y town of Dorado, Puerto Rico, there is a fabulous thing that happens every Sunday. They close off a section of road that runs along the ocean and a nature reserve. And from 6am to 11am, there's a tropical 10 mile loop. I've done 2 rides along this route. From my apartment to the loop and back is about 18 miles. The first bit from my apartment to the start of the nature reserve is a little dodgy, through the center of town with bad, narrow roads. So I try to get up early to avoid as much traffic as possible. However it doesn't get light enough until about 6:45am, so I have to wait until then to head out.

It's pretty amazing, having the road all to yourself (along with a bunch of runners + cyclists). And there were a bunch of nice, NICE bikes out on the road, and even a couple of legit, 25-man pelotons.

Webb: While Elle is enjoying tropical nature reserve bike rides, I've joined the #DoThePlanWithDan training. It is a 10-week bike plan built to bring Dan Lloyd, former pro-cyclist and current GCN (Global Cycling Network) presenter, back into fitness. I'll leave it to Dan to tell his story and why a guy whose job is cycling has fallen out of shape. You can follow along on Strava and Facebooger or if you are simply curious about how effective The Sufferfest is, check back with the GCN YouTube channel to see how Dan fared.

I'll be using it for similar purposes. My fitness has been up and down over the past two years. This structured approach will give me four hours on the bike each week which should allow me to squeeze in some run and swim workouts. At the end of the 10 weeks I hope to have some target races so that I can pick a proper training plan and be ready to go.

Elle: Elsewhere, I took my life in my hands recently and biked to work. Which normally isn't a big deal. But on this island, people drive a tad bit crazy. There's a shoulder for part of the way, but not the whole way. And with all of the monstrously deep pot holes, drivers often have to swerve into the other lane or shoulder to avoid them.
When Webb was here, we drove the route to see if it was safe to bike. Due to the conditions of the road, etc., Webb forbade me from riding it. But after a month of having to ask my co-workers to drive me to and from work everyday, I was craving some autonomy. So, despite my fear, I finally took the plunge and rode my bike to work. I don't know the deets on the ride because I didn't wear my sports watch. Was it because I didn't want Webb to get the auto alert from Strava that I had biked the forbidden route? Or did I just forget to put the watch on? You decide....

Addendum:
This morning I shared my shower with this guy: 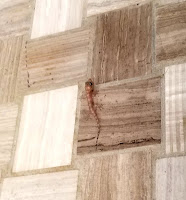 Don't know how he got in, because he couldn't seem to get himself out. So we played chase around the shower, as I tried not to step on him. Ahhhh, island living..