A story about Greg & Sandy

Here's a story about our friend Greg and Hurricane Sandy.

Greg is a fellow triathlete and member of Zoom Multisport, a tri team in Boston. We first "met" Greg via Twitter, when Webb became his 300th follower. (He is near 1,000 now; get on there and follow him.) Since then we've run into Greg at a number of races, he's a super fast runner and an all-around nice guy. 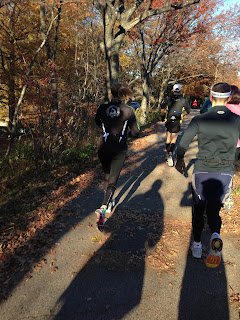 Greg is an endurance athlete. In addition to completing his first Ironman race this year, this past weekend he rocked the World's Toughest Mudder, a 24-hour obstacle race.  This is a long way to say he was ready to run the NYC marathon. When Bloomberg announced that the race was still on after the hurricane, Greg, like many others, traveled to NYC prepared to run. Then, as you all know, the day before the race, Bloomberg came out and announced that they were canceling the marathon. Greg decided he was going to do the run he had trained for, so he got on the computer, created a fundraising page, and then went to social media and made his own announcement: he was going to run in Boston, 1 mile for every $10 donated to his page (with all proceeds going to the Red Cross to help the hurricane victims). And at the bottom of the page he dared his friends and family, "Make me run!"

And with that Greg got back in his car and drove home to Boston. Meanwhile, his friends and family were clearly up to the challange. Greg thought it was possible that he'd raise somewhere in the area of $600, and may have to run 2 marathons. What he didn't expect is what happened: by the time he got back to Boston he had already raised over $1,000. Now Greg is a good runner, but he wasn't planning to run 100 miles.

So he put the call out to his friends to help him cover the miles. And he set up a schedule of runs throughout the day, starting at 6am and going all day with the final run at 7pm. As the donations kept coming in he declared that the miles would be run.

Despite Elle's knee injury and Webb's very bad cold or flu, we felt the need to step up and help Greg. We signed up for the 2:30PM run which was supposed to be an easy 5 or so miles. Greg had started the day with a 20-miler and had been out for more miles prior to our appearance. You should really check out his own account at www.ironzoom.com. We arrived and there was already about a small crowd of six or seven people. It was chilly, but the sun was out, warming things up. Finally it was time, we all put on our Red Cross "race numbers", and headed out. Greg led the way at a nice, easy pace. He had run over 30 miles at this point, so he wasn't breaking any speed records, which was good for both of us. With Elle's bum knee, she was only supposed to be doing 3 miles at a time. But since it was such a good cause, it had to be ok. It was a nice run and a gorgeous day. We ended up running almost exactly 6.2 miles (a full 10k). After 5 miles Elle's knee was feeling it, but she soldiered on. It felt good to do something important like this - it really shows you that so many times, and so easily, one person really can make a difference.