Webb: For the first race of 2015 we decided to leave the giant mounds of dirty snow behind us and head for the desert. The plan was to see my family and squeeze in an early sprint at the Starr Pass resort. We learned about this race from a friend on the ontri.com forum. I was intrigued; Elle was more excited.

Elle: O. M. G. I just wanted to get the heck out of the cold, dark, hinterland formerly known as Boston, Massachusetts.

Webb: The swim takes place in the resort's lazy river. Prior to race day we submitted our estimated 700 yard swim times. The race directors then placed us in order from fastest to slowest. I was lucky number 13 and Elle was number 17. Before you start thinking that we must have spent a lot more time in the pool than blogging in the preceding months, the race was limited to 50 competitors. Neither of us had swam much and the early season race had us wondering if we should have been numbers 49 and 50. 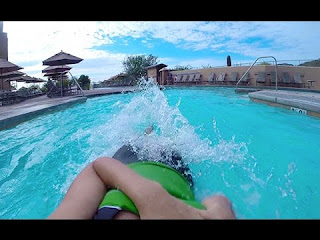 I was intrigued by this race because it begins on a waterslide. I will write that again:


This race begins on a waterslide.

Elle: Holy crap every race should start on a waterslide! I can't explain how fantastic it was, you just have to take my word for it. Or sign up yourself...

Webb: I could not agree more: Waterslides are the best way to begin a triathlon - no contest. We queued up according to our numbers and one by one flung ourselves down the waterslide every ten seconds. Race officials were clear that all competitors must go down feet first. After splash down you had to reorient yourself on your stomach and get your body pointed the right direction. Once that was accomplished, you had to head out for two laps around the lazy river against the current. Even though the current was not strong, my lats were screaming the whole time.

Elle: You'd be surprised how hard it is to navigate a lazy river. Even though we were technically in a pool, I almost swam straight into the wall a couple of times. On the bright side, this was by far the shortest swim we have done. And it was over before I knew it. Sweet.

Webb: I was more confident in my bike fitness than my swimming since we completed the Tour of Sufferlandria at the beginning of February and had continued with our TheSufferfest.com workouts. Still, we had not been outdoors on a bike in months, so there was a question as to how the body would respond.

The course was a down-and-up affair. Star Pass sits atop of a hill. We rode out of the transition area (TA) down the hill about a half-mile and then onto a looped course for three laps (each being a touch under five miles). After the third lap we returned back up the hill to the TA.

Each lap started fast and ended slow. You begin with a fast descent, followed by a right turn continuing downhill. Your next right initially descends further, but then it levels out after a punchy hill. Your last right takes you on a gradual climb back up to begin your next lap or your return even farther up the hill to the TA.

Elle: Honestly, I was just so happy to be outside in the sun and the warmth, you couldn't have wiped the smile off my face. I passed a number of racers, men and women, young and old. I think it's possible that the long, harsh winter had actually given me a mental edge. Most of the racers were from the area, and maybe they took it for granted? Meanwhile, I was high on sunshine.

Webb: I loved it. After all that time indoors on the trainer (which I also love unabashedly), it was good to get out and race with people. Immediately out of T1 I found myself working with a guy who came out of the water just ahead of me. We yoyo-ed back and forth for the first lap. I was certain I was working too hard but just could not help myself. It was so much fun to race outside. About a quarter of the way into the second lap I realized that my race buddy was no longer keeping pace, but whoa! I had a new race buddy who came up alongside and passed me. At first, I did not think I could close the gap on him, however, within a few miles I was passing him and we began working together. (A note for new readers: I abhor drafting. By working together we forced each other to keep up the pace. If the lead rider begins to slow down, the back rider overtakes him and forces the pace anew. It will force you to work harder than if you were alone, but it can break you too.) After the final right turn up the hill he began to pull away from me. A few times I narrowed the gap but I could not get close enough to pass him or to keep up. I decided to settle down and see if I could run him down.

Webb: This was the part of the race we both found daunting. It was pretty simple: Run 1.55 miles down the hill, turnaround and run 1.55 miles back up the hill. That's it!

Elle: That's it. Oh, and it's 80-degrees. And sunny. And there's zero shade. But even so, I was still really excited to be there.

Webb: Coming out of T2 I could really feel how much fun I had on the bike. Even though it was mostly downhill at the beginning, my legs were fried enough that I was still having problems. I focused on keeping a high turnover and hoped that I would recover enough to push harder soon enough.

Almost immediately I encountered the first two men coming in hard for the finish. (Wow, they were fast.) A half-mile later, the lead woman ran past me and offered me some encouragement. I started to count. My race buddy from the bike course was in front of me, which put me in fourth, if there was no one other men in front. I tried to maintain contact with him while also attempting to recover. After we passed the 1-mile aid station, the 3rd-place male passed me on his way to the finish line. He looked strong. That put me in 5th with a hope for 4th. A little before the turnaround my race buddy passed me. We high-5'd. He only had 200m on me and I was feeling better. Unfortunately, so was he; that was the closest I would get.

I started to run like the prey instead of the predator. I had seen a couple of guys behind me after I made the turnaround and had no idea how much, if any, of a head start I had on them from the swim time trial start. I pushed hard up the hill. Eventually the racers running the opposite direction stopped saying, "good job" and started saying, "good job you guys." Guys??? Then the footsteps behind me became more audible. I tried to run harder, desperate to hold onto 5th. He finally ran by me and to my great relief I saw the "R" relay marking on his calf. Relief was soon replaced with realization that another might be behind me; I pressed onward.

Elle: This was my time to shine. I can't beat Webb on the swim or the bike. But I can often get him on the run. I started out hard. It was hot. But I took the free speed that comes with running downhill. So I went full gas. About a quarter of a mile in, I saw the 1st place woman running towards me. Holy cow, she was fast! As we passed each other she said to me, 'Good job.' To which I responded, 'You too!'. That was nice. Then at about a half a mile from the turn around I saw Webb running up towards me. 'I think you're the 4th woman!' he called out. That got me excited. I made the turn around and started the 1.5 mile climb to the finish. I was going hard, and passed a lot of people. But ended up stopping, not once, but twice! I never stop during the run on a sprint. But this course was a little severe. As I approached the finish line, I gave it all I had, and crossed, fully exhausted, with Webb yelling out encouraging words. As soon as I crossed, Jodee, the race director immediately came over, she looked concerned. 'You're not sweating. That's a problem. You need water, now!'
I was really surprised by that. I hadn't even noticed that I wasn't sweating. Hello, dry heat!

Oh and by the way, I beat Webb by more than 40 seconds on the run.

Webb: I was taken aback by our results. I finished 5th male (and 6th overall, not counting the relay team). Spoiler Alert: Elle did not win, that honor would go to a pro triathlete. She did finish 4th female (and 10th overall, again, not counting the relay). My goal coming into the race was to finish in the top 25 overall, Elle's was to finish top 10 among the women. I was especially surprised with the result considering that the top three were a MTB national champion and Olympian (doing his first triathlon), a pro XTERRA triathlete and the aforementioned pro woman. One of the great things about our sport is that even small races can bring great athletes.

Elle: I was really surprised and pleased with my results. It was a fun race, and I was really glad we made the trip out there. The race directors, husband and wife duo Barry and Jodee Siff did a great job. They were super friendly and have created a fun, unique race at this venue that I would definitely recommend. The race has already expanded to 75 athletes - they are taking it slowly to make sure they can successfully accommodate the number of racers, which is smart. We give this race 2 thumbs up!