Webb: What better way is there to end a Tour than with a mad dash to the finish line? Or how about 64 mad dashes? 64! I could tell you how they are broken down. Do you really want to know before hand? You don't. Best not to ask. It is best just to do them.

Elle: Day 9. The last day of the tour. I could see the light at the end of the tunnel. I'll be honest, I was glad as hell that it was all about to be over. But oddly, I was a little sad too. There was an odd magic in knowing that people all around the world were suffering just like I was. There was a sense of camaraderie, even though none of us have ever met.

Webb: I had never completed this workout before. We bought when it first came out, which was pretty close to my Knighthood attempt. It was also during a time that my back and hip were temperamental. We picked a day for me to test it out to see if it would end up on the Knighthood schedule. I lasted 30 minutes. The big power jumps and high cadence was too much for my hip. I abandoned that day with two thoughts in mind: 1) No way in HELL was that going on the schedule, and 2) I would be back for it some day. Thanks to GvA that would be Stage 9 of the Tour.

Elle: This video definitely has the best visual, on screen cues. And with a workout like this, that really helps. Another thing I like about this one - Cavendish being interviewed... "stupid fast hamster!".

Webb: I started the Tour with three new personal bests: new FTP (20:00 power), 15:00 and 10:00. Stages 2-8 saw no more personal bests as I was basically cooked. On the final day I saw the sprints as multiple opportunities to grab some short-interval personal bests. Before the workout I wrote by best watts for :05, :10, :20 and :30 bouts and posted them next to the computer. At the end of Violator, I had improved my :05 personal best by more than 120 watts and bumped up the :10 personal best too.

Elle: Wel done, Mr. Over-Achiever. Meanwhile, it was finally time to shower up and enjoy a celebratory brunch at Five Horses with fellow cyclist Natasja. We ate and drank and talked cycling. Both glad as hell but also sad to arrive at the end of the 2014 Tour of Sufferlandria. Long live Sufferlandria!
Posted by Elle and Webb at 10:58 PM 4 comments

Here were are: The penultimate Stage 8 - Blender 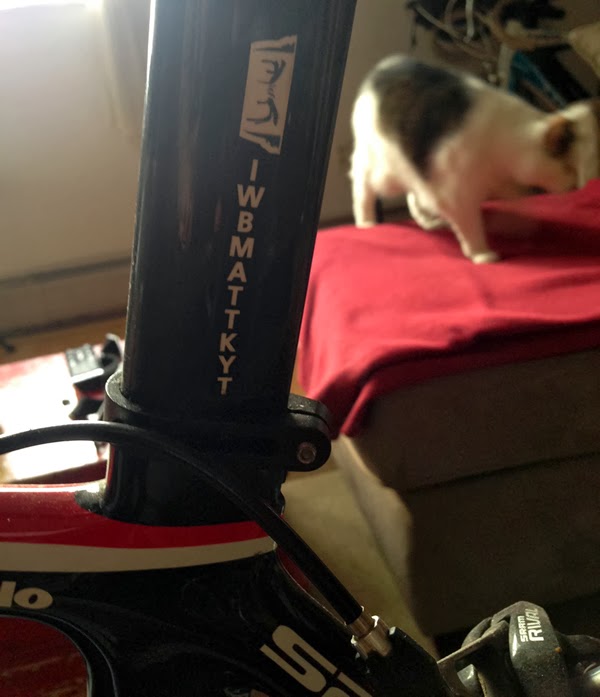 Elle: I normally enjoy suffering through this workout. I like intervals. But not today. There was just so much soreness in so many places.

Webb: I know the Sufferlandrians were all freaked out about Stage 7. I get that. I was too. Stage 8 worried me more because Blender is damn hard and I could not imagine doing it the day after a double-session of Angels and The Hunted. Just to make it more difficult, we had to be on the bikes about 30 minutes after waking up. Such is the life of a Sufferlandrian.

Elle: Here we are, in the final days of the tour. Everyone is hurting. Everyone is tired. We may be starting to go a little crazy. My pre-workout nutrition was 3 full on spoonfuls of Nutella. Meanwhile, Webb had left-over fries from last night. Yeah, we're cool like that.

Webb: I dialed this one back to 70%. I was too tired from the previous seven days, finishing the double-session about 12 hours earlier and just waking up. Even at a recovery effort the legs were not moving the first 15-20 minutes. Like a sprinter in the mountains, I just kept the pedals moving and willing myself to the finish line.

Elle: I had done Rubber Glove at 100% and then all of the following videos at 80%. That made each workout challenging, but allowed me (I think) to go strong for the whole Tour.

Webb: That was a good way to handle the Tour. I, on the other hand, opted to do Rubber Glove and The Wretched at 100% and then pick and choose which videos I would scale back and by how much depending on how I felt at the time. Of course that also means I could exceed my targets on a given day if I ended up feeling better as the workout proceeded. That happened on Stage 8.

During the dreaded pain shakes - thanks again Coach Neal - something happened. The legs began to stir. By the time we arrived at the third set of shakes, I decided to climb the ladder. With each of the six :20 intervals I increased my watts. I didn't break any records, but I did break up some junk in my legs. I followed the same model for the final TT intervals. No records were harmed in this set either. Instead, my reward was sitting on my bike after the workout ended wondering how I was going to dismount.

Elle: This stage hurt (obviously), but it's always fun to see Cavendish almost get clocked in the head. And then the blender shows up on the screen, and I start craving smoothies like you don't even know. Luckily Webb just bought me a Magic Bullet blender, so I made my own 'pain' shakes. Mine were way more enjoyable...
Posted by Elle and Webb at 5:12 PM 0 comments

Webb: I think this was the second, maybe third, TheSufferfest.com video we purchased. (Downward Spiral was the first. That was like a punch in the teeth - until we bought Revolver.) Back before we bought every video as soon as each became available, we bought this one to improve our climbing. Angels features three 8-minute climbs at LBL, Paris-Nice and the Dauphine-Libere.

Elle: Everyone has their favorite. And this one is mine. I love every song, and sing them out loud (how lucky for Webb). If I could buy a CD (yeah, I'm old school) of the entire playlist, I would. And I just really like this workout. I love riding with Contador and the Schlecks (and I'm a sucker for Frank's thumbs up). And there's the lady on the side of the road in the full on, florescent pink jumpsuit.

Webb: Hey kiddo, you can build a playlist from the soundtrack listing or just check out the Spotify link, both can be found here (just scroll down a bit).

In other news, I knew I did not have another 100% effort in me. Sure it had been 48 hours since The Wretched and about 36 hours since AVDP, still, the legs weren't there. Plus, everyone has had this day circled on the stage calendar. Angels AND The Hunted? This was going to be a tall order. I decided to try 80% and see what happened. Pain happened. The entire time I felt like my RPM and power windows were very small. If I found a rhythm at 82 RPM, 80 or 84 might be too little or too much. The same was true for power. My cadence and gears danced with each less gracefully than Contador on his pedals while I tried to find the right combination.

Elle: During the 'warm down', Webb and I had made the decision to order dinner to be delivered after we finished the next video. So while he was setting up The Hunted, I grabbed the iPad so we could easily order online and picked out a Mexican restaurant we've never ordered from before. We quickly chose a bunch of things off the menu, but they didn't have descriptions, so we didn't know exactly what we'd be getting. Nevermind that now, back on the bikes...

Stage 7b: The Hunted


Webb: Whew! Thank you GvA! Those three climbs in Angels just didn't hit the spot. It is a good thing The Hunted has a 20-minute climb followed by a fast finish. When I say my heart goes out to you, I mean, I thought it was actually leave my body.

Elle: Aaaaaaand the party is over. Spread some jam on me, because I'm TOAST. As we suffered through The Hunted, I noticed that the room had gotten quiet. Everything hurt. No energy for speaking. So much pain. I seriously didn't know if I was going to make it. And when it was all over and I finally got off the bike, I almost started crying. Not even the 'Happy Birthday' song, which usually puts me in good spirits could save me. I was D-O-N-E, DONE.

Webb: During the prelude to the climb, I was counting myself stupid for thinking I could handle this one at 80%. Did I not just struggle through the first hour-plus? Why on Earth would I think I could do it again? Unfortunately, we were already in it and there was no way I was getting back on the bike once I unsaddled myself. I don't remember when it happened on the clock, but I remember shouting "Whoa!" when Robert "I'll throw everything at you including the kitchen" Gesink escaped from our hard tempo with Andy Schleck. Feeling GvA peering at me across the tarmac from the team car, I met Gesink's acceleration and stayed with him to the summit. And then thought every muscle fiber in my quads was going to cramp.

After the fast downhill and recovery, I sorted myself with some pack riding. Looking at the TrainerRoad graph, I finally remembered the final five minutes that everyone has lamenting: Inverse intervals. Ugh. Best thing to do is close your eyes, go to the drops and listen to the sound cues. Don't even bother looking up.

Elle: Moments after we finished the second video, there was a knock at the door. Lo and behold, the delivery guy had arrived just in time. Webb grabbed a Heddy Topper beer out of the fridge, and we went to town on our Mexican fiesta of a meal. I had order something called 'fried fish', which I thought would be like fish and chips. NOPE. It was literally a full on fish that was fried whole. That was interesting. Luckily the rest of the dishes were delicious. And we had survived what some would say is the hardest day of the Tour. Huzzah!
Posted by Elle and Webb at 9:56 AM 1 comments