Day 11: Pulling Ourselves out of the Water and Up Some Hills

Webb: Today was a big day for us. We planned to take advantage of a beautiful New England day by finally getting our bikes outside. Of course, we had to swim too. Since our pool closes at 3p on Sunday that meant an early swim.

SWIM WORKOUT
w/u - 200 swim, 2x (100 pull-buoy, 100 kick, 100 swim)
Drill - 200 pull-outs and push-ups
Main - 200 at TPace
Webb: Losing an hour to Daylight Savings hurt me today. I really could have used that hour to sleep. Anyway, I decided to bring back the "pull-outs and push-ups" workout. I found this workout on GoSwim.tv and modified it to fit our circumstances. A "pull-out" is what you do when you pull yourself out of the water, except you only extend out to locked elbows. You don't actually exit the water. A push-up is, well, a push-up. So here is what we do. Our pool has a shallow end and a deep end. We start at the shallow end and swim the 25m to the deep end where we perform eight pull-outs. We then swim back to the shallow side. After seven push-ups on the deck, we return to the deep side and do six pull-outs. We repeat this pattern, descending each time, until we have completed eight laps in total. Your arms get pretty noodle-y.
Elle: I like doing the pull-outs and push-ups because I really need to work on getting stronger. And I always wonder if the other people at the pool think we're a little nuts when they see us getting up on the deck, doing push-ups, getting back in the pool, pulling ourselves almost out of the pool, then dropping back in. Not that there were a lot of people at the pool this morning, I think there were only 2 other swimmers.
THE BIKE WORKOUT
Easy, aerobic effort for 2:45
Webb: It was a beautiful day to get out on the bikes. It was sunny and bright, if not a bit chilly in the beginning. Armed with new gloves, some Mad Alchemy embrocated legs and my Evil Racing Cult wheels, I was ready to go out there and not go so hard.
Elle: Easy, my butt! It may have been an easy ride for Webb (who is much stronger than me on the bike) and Lenny (who is a serious cyclist - he even has a cycling coach), but today I was working. Maybe my memory is a little off, but I don't recall that many flat straight-aways, we were going up and down most of the way. Some hills were short and steep, others more gradual, and never-ending. I did my best to stay with the guys, and only got dropped a couple of times, mostly near then end, when I started to feel my gas tank head towards empty. My Garmin logged the ride at 39.6 miles. 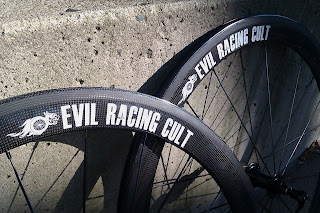 Webb: I absolutely love my ERC wheels. I felt stable and fast all afternoon, even on Trapelo Road. I am sure those of you who have ridden Boston-metro's poorest excuse for a roadway have often wondered just how tough Paris-Roubaix could be. I mean, the cobblestones appear to be pretty uniform and consistent. Trapelo has lots of surprises waiting for you each inch of the way. The wheels were brilliant.
I also had some fun descents. For the past few years, Lenny has continued to get stronger and stronger on the bike; it takes everything I have to stay on his rear wheel. The one thing I could match him on was descending. That was until he bought aero wheels and started flying by me. Today the playing field was leveled again - well, except he is still at least 30% stronger. The wheels felt great. There was never a moment, descending or otherwise, where I had any concerns. They are stronger and lighter than any of my other wheels. This being my first foray into carbon wheels (and these do not have aluminum brake ... um, paths?), I wondered a little about security. As it turns out, I actually feel more confident on these than my other wheels. And we should not forget how badass they look on the machine. Of course, that meant Elle was left out of the party. We'll have to get her some.
Elle: And if history repeats itself, that means that Webb will upgrade his wheels, and I'll get his old, hand-me-downs.

Webb: I'm not sure I can upgrade from these.
Posted by Elle and Webb at 11:16 AM