Webb: Let's kick this post off with a quick plot summary of the The Wretched. It is sooooo appropriate given my current state of fitness. Here it is: You had a good season and got a little cocky. There were donuts. And laziness. You became wretched. Now you are in the Tour de France based on qualifying points earned when you were strong and fit. Not surprisingly you have not shown well, so on this final stage of Le Tour, your only attempt to bring honor and glory to Sufferlandria is to bring home the stage victory.

I can relate. My FTP in TrainerRoad is inflated. If I did Rubber Glove right now, I don't know if I could finish it. For this reason, my goal is to attempt to complete each of the workouts at 80% (based on my out-of-date FTP). This might be a bad plan. Angels went well on Day 1. I felt good (i.e., not totally wrecked). Tonight with about 15 minutes to go in the 35:00 set I began to waver mentally. Thankfully, I had the typically great visual and music to help me push through. Of course, it is also easier having my suffer-buddy spinning along next to me. Especially when she decided to up the ante right a game time.

Elle: I wanted to be smart, and so I planned to be conservative about this workout. But you know how it goes, you get all wrapped up in the excitement of suffering, and I basically rode this at 100%. Although I haven't been doing many Sufferfests in the past couple of months (known to triathletes as the 'Off Season'), I have been keeping up with my weekly BootCamp and Spin classes. So I'm not totally 'wretched' at this point... 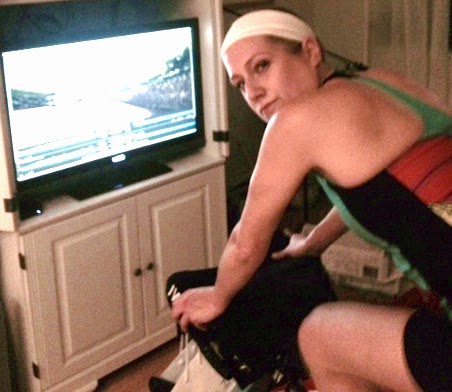 Webb: Here we are the morning of Day 3, some nine hours after unsaddling ourselves from The Wretched. Oh boy. With the full authority of the Scheduler's Prerogative, I chose Half is Easy knowing Thursday morning was going to be tight on time. A 40-minute workout would be preferable for both of us if we intended on making our jobligations. I foolishly thought I might still be able to squeeze in Extra Shot. That did not happen.

I was under no illusion that it would be easy. Any Sufferlandrian knows "easy" is only used with sarcasm, as in ... The Other Half is Not. Forty sprints with forty paltry recoveries: HR up. HR kinda down. HR up more. HR down less. Even at 80% it took me the first five sprints to find my legs. I won't talk about the last five. Suffice to say that in the beginning and end I wasn't sure I would finish and yet I did.

Elle: Ahhh, the early morning Sufferfest. I was absolutely feeling last nights workout in my legs, which felt a little bit like lead. Although I started the video at 100%, that didn't last long. This is one heck of a heart rate spiker. I gave it everything I had, which declined throughout the workout, as I lost my will to live power. Thankfully, we have a full 24 before the next 'fest to rest up and prepare for more glorious suffering.

We are half-way done. Next up: The Rookie.
Posted by Elle and Webb at 8:06 PM