Day 6: We all admire the soloist, the breakaway artist, the fearless cyclist who tries to escape the peloton because whoever they are, whenever they attempt it, they become "The Hunted." 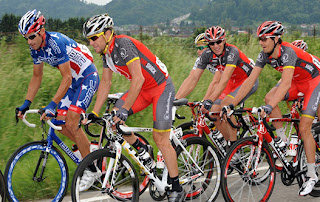 Webb: What a wonderful piece of work this is. The first 20:00 fly by with a warm-up and tempo ride where you free yourself from the pack to ride alone. What follows is 20:00 of big gear above-tempo riding. You are hunted, yet you are also chasing Robert Gesink. At the 15:00 mark, I swear I felt the need to pop my ears from the altitude gain. A fast descent greets you on the other side of the summit with RPMs over 110.  I made a point not to relax as this segment is not a recovery, it is merely a reduced effort.

As tired as I am, I have been happy with my numbers. I think all the pelvic and lumbar posturing exercises I have been doing have allowed me to be more efficient with my pedal stroke, putting out more power even though my overall fitness is not where it was in October.  Do the little things, they pay off.

Elle: So by this time in the Sufferfestukah celebrations I find myself running low on Chamois Butt'r. Because when you do 10 back-to-back days of trainer rides like this, you need lots of Chamois Butt'r, trust me. "The Hunted" is a good workout (aren't they all?), you get to ride with the ever-so-controversial Lance Armstrong - and be on the lookout for Hincapie's cool U.S. National Champion kit.

Webb: Once you recover from the descent, it is back to being prey. You must tempo ride for 10:00. Well, 5:00, then 5:00 of maybe what TheSufferfest.com has to offer. I don't even know who to describe the madness the final 5:00 entails. I'll put it this way: Those 5:00 minutes are broken down into 5 x 1:00 segments (intervals would be too kind a word). I did four of them. I honestly had nothing left for the fifth. I nearly had enough lunch left over to leave it all over my front wheel though. No joke. No hyperbole. Just the hard, nauseous truth.

Elle: I always get a kick out of the cyclists getting stopped by the train. Even though I know it's going to happen...and be prepared for a Schleck to launch an attack up the climb. As usual....

Next up: Grab your teddy bears Sufferlandrians, we're going to "A Very Dark Place."
Posted by Elle and Webb at 3:08 PM