Ahhhh Sunday, a day for rest and relaxation. The morning crossword puzzle, perhaps brunch and maybe lounging around on the sofa watching a bad movie on cable TV...
WRONG!
This is the first Sunday of SufferFestukah. First up was the trip to the pool. Second was, of course, Day 3 of the Ten Days of Torment.


Webb: What started out to be a maintenance swim, a simple workout to retain our feel for the water, became something else. Something a little more suffer-y. Readers of the blog know we particularly love what we call the 3x500 workout: 500 swim, 500 swim w/ buoy, 500 swim w/ buoy + paddles. (Later in the season we add a fourth 500m of swim at the end.) Just get in and go. No official warm-up or cool-down. Just go. Elle wanted to include some strength work, so we tacked on 400 at the end as 8x50 descending pull-outs. Basically, you swim one 25m length (to the deep end) and perform 8 pull-outs, turn around swim 50m returning back to the deep end to perform 7 pull-outs. Continue this pattern until you do one pull-out and swim the final 25m. It is great because it builds strength in your lats and rear deltoids and, more importantly, it definitely helps you think more clearly about how your muscles engage throughout the stroke. So the simple workout became a 45:00 muscle-endurance session.

Elle: I actually felt good in the water today. I guess joining CMSC (Cambridge Masters Swim Club) is really making a difference! I actually, do I dare say, feel that I'm staring to get better in the pool. The 500 meter set with paddles was tough, and I may have pulled something on the first or second set of pull-outs, but overall, I felt good. And with the sun streaming in from the high windows, glistening off the water, throwing highlights around the pool deck, there was a serene air to this workout. What a total contrast compared to the workout we were in for later that day... 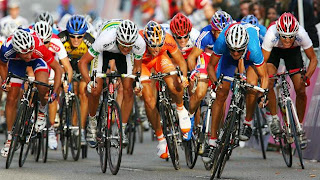 Webb: From the moment I sat on the saddle I knew it was going to be rough. Thing are a bit ... tender down in them there parts. I lathered on the Chamois Butt'r expecting as much. Still as our friend Ben says, "There is a difference between being told you are going to be slapped in the face and being slapped in the face." So true.

Once I started pedaling my quads resisted. I maintained a steady effort through the warm-up and reminded myself that we cannot, must not, do all of the workouts as prescribed. Right into the first set of TT pyramids my legs were reluctant but getting the job done. Hmmm, I thought, maybe I have this workout in me. And so it went for the next 50 minutes or so. By the time each interval was nearly finished, I was hurting, I'd then recover well enough to start the next interval. At least that was how it was until the sprints at the end. I'm satisfied with my strong, if not reasonable efforts.

The "Extra Shot:20" was a different story. If you are going to do it after a video, let's say, something like "Local Hero," then it should have a new name. I suggest "Quadpocalypse." The first half o is just merciless - ten minutes of  relentless lactic-acid building tempo. The second half brings the bergs. (Is berg Belgian for "dig deep or get dropped?") At first you welcome the change of cadence and bigger gears. It doesn't take long though for your quads to respond: You are an idiot; get off the bike. Once the workout was over it took some time to dismount. I just sat there on my saddle, blinking and breathing.

Elle: Holy frites and mayonaise, this was a tough day. I was nervous about the long bike workout, no lie. And that made me anxious to get going. I decided before I even got on the bike, that, if I could finish the workout, I'd celebrate with pizza and beer. Incentives! I didn't let Webb know about the plan, best to leave him in the dark until absolutely necesary...

Oh, climbing with Cadel & Gilbert, what a "treat". There was a nice shout-out to Jens Voigt in the road at one point - huge chalk letters, 'SHUT UP LEGS'. I didn't actually catch a glimpse of Jensie during the workout. We must have been going to fast....
As soon as I was off the bike I announced the pizza-beer plan. Webb was 100% on board....