Webb: I ended last season with a new herniated disc in my lower back. After sitting out November and December, I began training at the beginning of the year. The training has been heavily focused on strengthening the posterior chain and base fitness. Even my so-called build period has lacked consistent intensity. As such, I felt it was prudent to put off any racing a bit longer. Plus, it sounded cold.

Elle: Our luck with race-day weather hasn't been so great, and that morning was no different. The weather forecast was cold with possible rain. It was tough to find proper race apparel, I actually didn't know what to wear. It was cold. Really cold. I ruffled through my sports gear to find arm AND leg warmers. And on the way out of the apartment I grabbed a wadded up, old bike/wind jacket. And a hat. And gloves.

Webb: I like to make race-day playlists for those times when we drive to race sites. On this day I decided to put together a playlist made up exclusively from TheSufferfest.com workouts. The plan was to put Elle in a drop the hammer frame of mind. Pavlov would have been proud.

Elle: After getting slightly lost, we finally arrived to a small, cold, damp race site. It was clear from the beginning, this was not going to be a big race. The weather, to be honest, was shite. And I was pretty sure that only the hard core competitors would show up in these conditions. Transition area was low key; the competition was not. Webb was great acting as race-site coach/soigner. He sent me out for a bike warm up, but I had to turn back because my fingers were stinging and going numb. He then sent me out for a shake-out run, which went a little better. He then led me through some drills. And before I knew it, the athletes were rounding up to start the race. I was trying to figure out where to stand, I assumed that the men would start and then the women, like in the last duathlon we did. So I tried to move back in the group. But no, this was just a plain, old, mass start - men, women, all age groups. Things were rough from the start. 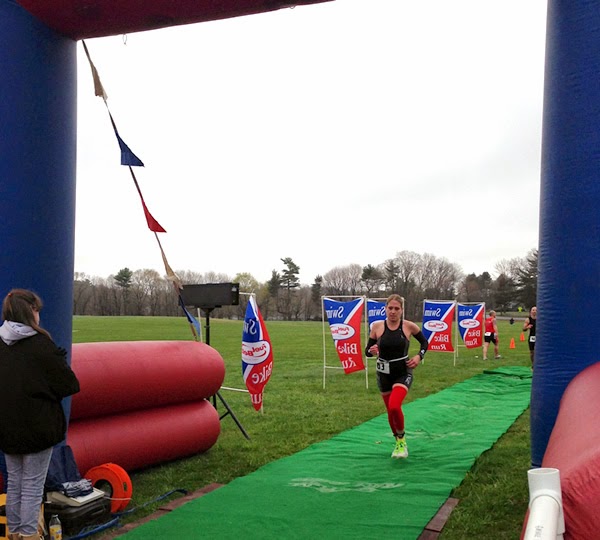 I started out fast. At least I felt like I was running fast. But I kept getting passed, which I'm not used to. I started to talk to myself,  "It's ok, you can't beat 'em all the time, sometimes you just have a bad race. Don't worry about it, run your race and do the best you can." As I was consoling myself about not going as fast as I had planned, I finally glanced down at my Garmin. I was running a sub-7 minute/mile pace! WTF? Now I was just confused. I decided right there to just go as hard as I could and see where the chips would fall.

I entered the transition area in 6th overall (for women).

T1
I had a decent transition time I think, considering it was the first of the year.

Bike - 11 miles
I'll call this the 'Sailing' section of the race. The wind/rain jacket I had grabbed while running out of the house didn't fit. At all. It flapped and ballooned like mad, acting as an opposing force to my forward movement. Great. Meanwhile, it was so rainy and misty that my sunglasses were covered with water droplets, completely obscuring my view, so I had to pull them down the tip of my nose, making me look like a grandma looking over the tops of the lenses.

I Entered the transition area still in 6th place. It was a small miracle.

Run #2 - 2 miles
It was such a weird day, I just went all out and hoped for the best. I ended up finishing 6th, I had closed on 5th but needed a little more running room. She was too tough on the bike. Plus she didn't have a wind sail holding her back.