Thank you to the town of Wellesley, Dan from SEAC and Specialized (my bike helmet)

Elle: Well, 2013 has been rough so far, and today was another test. My knee has been feeling pretty good, and Webb and I have gone out on some nice, long, easy-endurance building Sunday bike rides. Today we headed out on the tri bikes to get them back on the road, and shake off some cobwebs before next Saturdays sprint triathlon, Escape the Cape. The ride was going well, it was a tad bit hot, but besides that, a good ride.

Webb: It was important to get out today to ensure we still know how to handle the twitchy TT/tri bikes. I didn't spend that much time in aero because I found myself getting caught up in the fun and pushing too hard. I also needed to reacquaint myself with a 39T inner ring. My road bike has a compact crank and rear cassette with bigger cogs. The tri bike is built for flatter, faster courses. Big gears. I needed today to remember what tools I would have at my feet at the race next Saturday morning.

The course we rode is about 35 miles with the last 15 or so featuring the last half of the Boston Marathon route. At mile 20 we turned right onto Washington Street in Wellesley, headed for the Firehouse on Commonwealth Ave, where we turn right to take on the Newton hills (and the famous Heartbreak Hill) and then head home. That was the plan anyway.

Elle: Yeah, that was the plan. That's what we did last Sunday, and everything went swimmingly. This week, not so much. So, I don't really know how or why it happened. We were at the bottom of a hill; we had gathered some speed. I'm usually pretty good at anticipating what Webb is about to do next. But today, for some reason, that didn't happen. I guess I had too much speed. I consider myself a pretty good bike handler, but today maybe my luck ran out. I saw that I was approaching Webb much too fast. Cars to the left, high curb sidewalk to the right, nowhere to go. So I crashed into Webb. I don't remember specifics except my head hit the road pretty hard and my body went skidding across the pavement.

Webb: I don't know what was happening behind me. We were cruising down Washington Street and there is a part where the two lanes merge into one and the former right lane becomes parking. I began to slow as there were cars queued up with negligible room between the moving and parked cars. I then hear Elle shout something like, "Webb, wha-why aragghhght aahhhhhhhh." Then she hit me. My first thought was, keep control of the bike, don't panic. There was an irresistible pull to the right and that was when I accepted I was going down. I was able to unclip my right shoe and brace my fall.

I think I twisted my torso and landed in a push-up/plank position. Immediately I looked back to check on Elle who was inexplicably still in the midst of her crash. I saw her hit the pavement as she cried out. I jumped up to get her out of the street and onto the sidewalk. The whole time I was weighing/debating whether I should move her at all. She wasn't unconscious, yet, I wasn't confident either of us was in a position to know how injured she was. I just wanted her out of the street.

Once onto the sidewalk I began assessing the situation. From the right a young guy in a blue polo came jogging up the street. Then from my left came a young woman who was on her way to rowing practice. The guy began assisting Elle, asking her if anything was hurt. The young woman told us she keeps a first aid kit in her car and left to get it. The three of us surveyed Elle's visible injuries. She had a noticeable patch of road rash on her right shoulder and a nasty injury to her elbow. It was bloodied, lumpy and swollen. I liked it not. I wanted to get compression on it as quickly as possible. Both of our good samaritans directed me to a CVS about 250 feet up the street. Off I went for more first aid supplies.

Elle: I don't remember too much right after the crash. I knew it was kinda bad, but I was pretty 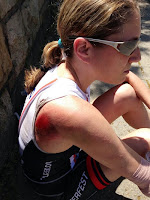 sure nothing was broken. The craziest part was that it seemed like within seconds there was a 'team' assisting me. A support vehicle couldn't have been this fast! Webb was moving the bikes. A stranger was running to get a first aid kit. This guy out of nowhere was holding my head up, asking me questions about how I was.

Guy:  Is anything broken?
Me:  Yes, I think my sunglasses are broken.

My head was hurting from the big contact with the road, and at first I didn't feel comfortable moving at all. But slowly, I did, and internally did a check - nothing seemed broken. Good. I think a third person showed up with water, pouring it on me (it was hot, and there was a lot of gravel stuck to me) and telling me to drink. I was dazed, for sure. Are the bikes ok? ARE THE BIKES OK?!?!?!?!

Webb: What I remember most clearly after we moved to the safety of the sidewalk was Elle responding to every question with, "I'm fine. Are the bikes ok?"  I would always say, "they're fine, we'll deal with any problem they might have." That was an unacceptable response for her as she urged me to check them. Male Good Samaritan and I worked together to extract Elle's aero bars from between my spokes and drivetrain side chain stay. I checked out her bike first. Everything worked fine. And a feel test did not reveal any obvious cracks in the frame. She just needs new bar tape. Then came my bike. Frame first. Whew, no noticeable damage. Then the rear wheel. <Deep breath> I took my race wheels out today as I just replaced my brakes and wanted to be sure everything worked great. Not surprisingly the wheel was out of true enough to render my bike unrideable. The front wheel is also a little out of true, but not so bad. With Elle's elbow looking pretty bad and inadequate to provide control on the notoriously poor roads of Massachusetts and now with my bike not rideable, it was time to call in the cavalry.

I called Dan, shoe-slinger, coach and provider of emergency roadside assistance. He interrupted his day to drive his van out to collect us and the bikes and take us home. If he hadn't come through, I'm not sure what we would have done.

Elle: I'll try to wrap this up. First, huge, immeasurable thanks to Good Samaritan guy (who 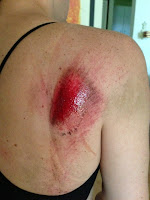 also stopped by later with a friend in a truck to see if we needed a lift anywhere), rower girl with bag-o-first aid who called her coxswain to tell her she'd be late for rowing practice, due to helping me. Also, random guy who drove by later, had seen the crash, went home, and came back with ice packs. If you're going to crash, do it in the town of Wellesley. The good will of the citizens was freaking heart warming. And of course, Dan of SEAC, for schlepping our sad butts home. I feel lucky that nothing worse happened, that the kindness of strangers was mind-blowingly present and amazing and that friends, in times of true trouble, drop everything to come to your aid. I may not be able to race next Saturday (cringe), but today was a true display of humanity.
Posted by Elle and Webb at 11:40 PM