Elle: I have to admit, I wasn't crazy about doing this race. I hadn't been working out, and I was feeling burnt out, mentally and physically. But we signed up, so we were doing it. I had been watching the weather, now that fall is here, I was nervous about facing cold, possibly nasty weather conditions. But we woke up race morning, although a bit chilly, no clouds, no wind, and a sunny forecast. Alright then! We packed up the car and headed to Buzzard's Bay. Something that we've been doing is making race CD's to listen to on race morning, which I'm loving. The music gets me all revved up, and then I have good tunes going through my head for the bike and run. And I have to admit, this most recent mix I made is a gooooooood one.

Webb: I was ambivalent about doing this race. For two years I have been dealing with a nagging hip/glute injury. This is going to be my off-season of finally giving it the attention it deserves and I wanted to start right away. On the other hand, this is a beautiful course by our favorite race director. As a bonus, this was Elle's first race in 2009. It would be fun to compare her results.

Elle: As usual, Max Performance put on a well organized race, so check-in, body marking, and transition area were all organized and efficient. The sun was out and shining, and as I set up my transition area, the vibe all around was pretty chill and friendly, everyone chatting and happy to be there. And of course I ran into Beth, winner of races, and, more importantly, in my age group. It's always good to see Beth. Even though I know she's going to beat me handily, her smiling face and friendly personality always put me at ease. Her cool, calm demeanor totally belies her kick-ass race performance. But that's one of the things I like about triathletes, they're a friendly bunch.

Webb: We also ran into our friend Ed who was on his way to buy a race belt. I usually have two race belts and two pairs of goggles. I loaned him one my belts, cuz that's how we triathletes do. Like us, he had not done much since his last race, also a month ago, when he had a good day at the inaugural Ironman Mont Tremblant.

Elle: I had been on a swim low, but as we were standing in our waves, waiting to head into the water, I overheard a girl behind me saying how she was a swimmer, not a triathlete, and she was just here for the swim. I turned to her and said, "I'm the worst swimmer here, do you have any tips for me?"
She thought for a second and said, "Don't lift your head."
And I'm telling you, as I swam, I thought about that. A lot. And I think it really helped! I knew that, but to have her remind me right before the start seemed to make a difference. I didn't end up having a stellar swim, but I felt good about it, and that's a big plus for me. 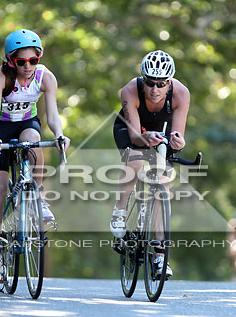 Webb: Meanwhile, my swim times over the past three years have consistently improved. It was time for a new mindset, so I planned to swim hard. I positioned myself on the inside just after the first third. When the air horn sounded I jumped in behind a fast group and tried to stay in the slipstream. That worked until the right side of my goggle filled with water. I tried to ignore it but I kept drinking seawater when the waves would hit my face on the left side. Not being able to breathe to the right side compounded the problem. Twice I stopped to empty my goggles and twice I failed. This was the first time this had happened to me so I doubt I exhibited any clear thinking or grace in my attempts. At any rate, I swam through it and took in a bit more of the  salty Atlantic Ocean.

Elle: I'm always happy to be on the bike, because it means the swim is over. I passed a bunch of people, which I have to do in order to make up for my poor swim performance. And the bike was fun - a scenic route with a couple of hills thrown in.


Webb: I finally got to the shore and started working my wetsuit off. This season I have made significant reductions in my T1 times. Still, I felt like I was moving in slow motion. No matter what I was trying to do it felt slow and awkward. Once on the bike I started out and up the hill that greets you after exiting the transition area. Immediately I played leap frog with a guy in the 50-54 age group (damn him for passing me in the swim!).  I moved past him and moments later was passed by someone in my age-group. He was going too fast to try to keep up. But then a few minutes later I saw him up ahead; I was gaining ever-so-slowly on him. I picked up the pace a bit and kept my effort steady. In a couple of minutes I was on him and passing him. For the next mile or so, I could hear him behind me (far enough not to be drafting). He then overtook me and I fought to keep him in sight. We would replay this for the next 10 miles, pushing each other.

If T1 felt slow, T2 took an eternity. My shoes were difficult to get on because my calves gave every indication they were waiting for the slightest provocation to cramp up. Through all of this one thought was ever-present: Elle was still in front of me. 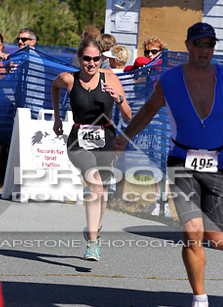 Elle: I rode into T2 feeling good, and headed out for the run - the course out of transition starts with a pretty gnarly hill. And wouldn't you know it, at the top, I got a side stitch that pretty much spelled out 'no run PR today' for me. Oh well. I still passed a good amount of people, but not enough to make my way onto the podium. Which, by the way, was super competitive today! Even on a good day, I don't think I would have had a chance. Beth, who usually comes in first, even came in second. It was rough out there. But what can you do - it was a gorgeous day of racing, I had a good time and I was glad that we signed up for it. I had been feeling down about racing, and today's triathlon rejuvenated me. And even though we have a much needed recovery month ahead of us, I'm excited about next year's race plan.

Webb: The run course follows the bike route for 1.55 miles before it turns around and heads back. That hill you run out of transition? Yeah, you get that going back down into the finish. My strategy was to run the first  2.5 miles of the 5k hard and let the hill deliver me to the finish line.

The guy I had ridden with passed me going up the hill and left me behind. I let him go with hopes I would catch him like I did on the bike. Even though my plan was to run hard, there was no reason to blow up before I arrived at the top of the hill. By the time I reached the top the sun was out and on the cusp of being too warm for my tastes. My breathing became rapid and had no discernible rhythm. I calmed my breathing while keeping my pace fast and steady and then began looking for Elle on the other side of the road. I finally saw her near the 1.5 mile mark. She had maybe 400m on me. 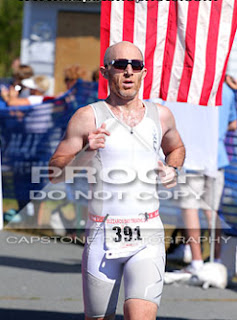 After the turnaround I really let myself have it. I had no way of knowing what my pace was. It didn't matter. My effort was going to be the same no matter what. I needed to give the hardest I could for 1 more mile before the big descent. Every time I felt like slowing down I forced myself to run harder. Most times I would focus on my foot turnover. Other times I would think about driving my feet through the pavement. I knew if I could just get to that downhill, I could let gravity take over and fall down the hill if I needed.

Finally I made it and let myself go, thinking of the Road Runner's feet as I flew down the hill. Halfway down I began hurting badly. I didn't care. Sure I misjudged how easy the downhill would make it, but hey it was going to hurt no matter what.  I decided to get it over with and kicked it up a notch. At the bottom of the hill I took the right turn to the finishing arch and kicked again.

As soon as my timing chip was off, I was sitting down with my feet in a kiddie pool of ice cold water. I sat there for several minutes catching my breath, cooling down. Meanwhile, Elle was standing nearby looking as fresh as ever chatting it up with Jorge and some others. I looked and felt like death. She looked like a fitness model on a photo shoot.

Elle: Watching Webb try to collect himself after a super hard effort just reminded me of how I don't push hard enough. Although today I really couldn't, due to the cramping, but still, this is something I've struggled with for awhile. So in 2013 I need to make a change - I'm really going to start working on giving it all I've got, I need to look like Webb did today at the end of all of my races next year.

Webb: Overall I had a faster time in 2012 than I did in 2009, but not by much. My swim time was slower - that can't be only because of my goggle problems. My T1 time had a big improvement, as did my run. T2 was about the same. I was shocked to see that my bike time was only slightly faster. I had expectations of taking minutes off my 2009 time. Since I am undoubtedly a better cyclist than I was three years ago, I'm not going to read too much into it. I'm ready for the off-season.
Posted by Elle and Webb at 7:03 PM